Actors Rep and #WTF HAPPENED? at the KC Fringe: A Reflection

What an amazing experience.

Six performances, audiences that exceeded everyone’s expectations, enthusiastic responses, an opportunity to broaden Actors Rep’s reputation and reach to an international level, and three weeks in a beautiful and charming city and area that are brimming with culture and theatre (a reasonable sample of which I was able to see).

We very proud of what we achieved:

The Fringe run of #WTF HAPPENED? ON THE PHENOMENON OF TRUMP was Actors Rep one of the best attended single runs of any show we’ve ever done.

UPDATE (04. September 2018) : We have received the final numbers from the KC Fringe and we now know that over 300 people saw the show there. That makes it our most popular production ever, with the highest total attendance of any show we’ve done (across the three runs in September 2017, June 2018 and July 2018).

#WTF HAPPENED? was named ‘Best of the Fringe’ for its venue (Musical Theatre Heritage Mainstage — ‘MTH’), a determination based largely on audience attendance.

The show received yet another glowing review (by Bob Evans of KC Applauds — linked below).

We opened dialogues with a couple of KC-area theatre companies about potential future collaborations. 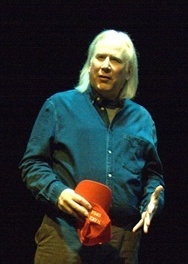 I was able to see six other shows on the Fringe plus two additional great productions at the Kansas Repertory Theatre (KRT) in Lawrence, Kansas, where Actors Rep Artistic Associate Peter Zazzali is Artistic Director.

We also did some touristy things, taking advantage of KC’s superb cultural and historic sites — the World War I Memorial and Museum, the Nelson-Atkins Museum of Art, the Negro Leagues Baseball Museum, a Kansas City Royals baseball game, ‘The Plaza’… 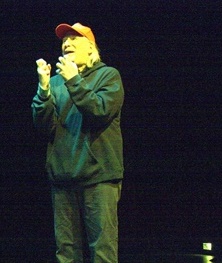 As an actor and writer, I was struck by the different responses the show has received not only from different audiences through all its runs, but also by the marked differences between Luxembourg / European audiences and US / Kansas City ones. I confess I experienced some trepidation about doing the show in the States, especially in a part of the country where President Trump is generally popular (although less so in the city itself).

Although the play is not, in our view as a company, politically partisan — and indeed we worked very hard to create a piece that did not take partisan political views (even though the characters within the play do) — we were (and I am as a playwright) very aware that the title of the play might suggest otherwise to some.

We did get one profane response to a Facebook post about the show from someone who lives in the greater KC area. I don’t know for sure whether the gentleman came to see the show, but my assumption is that he did not. A couple of people walked out of one performance, but we’ve no way of knowing whether they were upset about the play attacking the President, or not attacking him, or whether they were perhaps just late for an appointment they’d forgot.

The show is of course political, though not partisan. Overtly political theatre will often, even usually, offend someone. 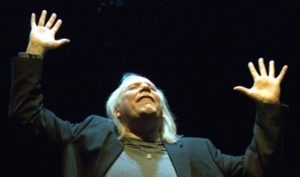 Laughs came at different places. The KC audiences found humour in things that Luxembourg audiences did not — and vice versa. The first two audiences, on Friday and Saturday, July 20th and 21st, laughed often and heartily. The critic, who attended one of those shows, described the piece as a ‘parody of Trump Supporters’ and termed it ‘a rollicking review’ of ‘character-types’ — a perspective I found interesting and unexpected, as we’ve never thought of the show as a parody. Still, Mr Evans loved the show and I personally take it as a point of playwright satisfaction that different audiences and different audience members can respond to the same piece in so many varied (and overwhelmingly positive) ways. 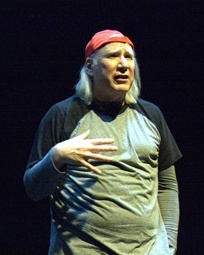 ‘The Guy Down the Street’

The list of ‘Thank yous’ is a long one, but I’ll repeat it here (with hopes I’m not leaving anyone out):

– FOCUNA, who gave us a travel grant that covered travel to and from KC.

– Our sponsor, e2advance, whose great work on our website has been essential to spreading the word about Actors Rep.

– Peter Zazzali, a long-time friend and loyal supporter of Actors Rep (and now our first Artistic Associate), who suggested we try to bring the show to the KC Fringe when told we were considering applying to one or more US Fringe Festivals — and who introduced us to Forrest Attaway and Kokopelli Theatre Company, our local on-the-ground co-producers.

– Forrest Attaway and Kokopelli, who were fantastic and generous collaborators and partners (and the two Kokopelli shows I saw, How Does Your Garden Grow? and Little Headshop of Horrors were very very funny).

– Steve and Wallace, the technicians for the run.

– The staff of the Musical Theatre Heritage space, a lovely complex of three performance spaces set on the top floor of a downtown retail and food complex (Crown Center). These folks were wonderful hosts.

– The staff and volunteers of the Fringe, for their hundreds of hours of work and incredible organisation. I’ll especially single out Program Manager and Director of Operations Tiffany Chappell, Executive Producer Cheryl Kimmi, and Technical Director Skip Gordon. The execution and organisation of (and communication about) this mammoth project was extraordinary, from the first email right through to the final party.

– The audiences. Of course.

– Christine Probst, without whom neither #WTF HAPPENED? nor Actors Rep would still exist. Actors Rep audiences have seen what magic she creates onstage as an actress. Her work as a director and dramaturgical collaborator is no less spectacular.

– Dena Abbott, who has been tireless in her support of Actors Rep (and its chaotic Artistic Director). 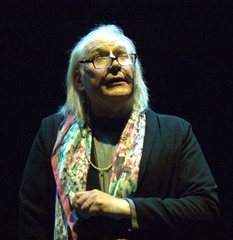 This show has proved to be popular in three separate runs in two countries; it appears to have struck a theatrical nerve in these interesting times. So we hope to keep doing it. We’re exploring other possible venues, festivals, etc., where we might be able to present it to new audiences — in Luxembourg, in The Greater Region, in Europe, in the UK, in Ireland, in North America — anywhere an audience might be open to the questions posed and the ideas presented in what we feel is the exciting theatricality of #WTF?

If you have any ideas, please contact us. The production is extremely portable. We took it 7,500 kilometres; we can take it anywhere.

A company, organisation, club or group that might fancy a bit of thought-provoking theatre?

Ask around. Let us know.

As for Actors Rep in the coming months…

We will present Dear Santa… again for the holiday season.

This completely portable 45-minute dose of seasonal cheer is available for booking for your company or organisation’s holiday event.

We can bring it to you!

Last year’s response — both in the public and private shows — was overwhelmingly positive. Don’t miss your chance to brighten your holiday with Dear Santa…

We’re planning on offering a workshop this autumn — probably a fun two-session playwriting exercise — and are looking at the possibility of offering a set of classes.

And we’ll be hard at work planning for 2019 — to bring you another year of outstanding professional English-language theatre.

So keep in touch. We’ll see you at the theatre…